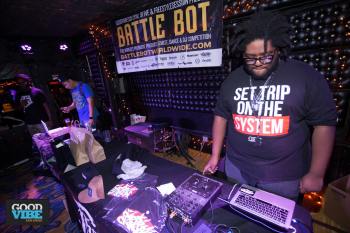 For years San Diego cultivated small but dedicated Hip-Hop scene which has become increasingly more and more connected; and grown at a tremendous rate over the years. While there are hundreds, perhaps even thousands of various emcees, DJs and producers who regularly contribute to the local; one of it’s most dedicated and tireless advocates is none other than producer of theme music DJ Root. DJ Root of the No Sucker DJs Crew returned to Step Off! Magazine making his first appearance on Step Off! Radio to discuss the growth of the San Diego local Hip-Hop scene, the upcoming fifth anniversary of the San Diego Battle-Bot competition and as well as the region’s contributions to the bigger discussion on Hip-Hop’s influence on society. Likewise, we also got to discuss the genre’s ability of spreading awareness and social conscious through the power of music, culture, and the power of uplifting and empowering our communities.

Featured below is our full interview with DJ Root available through our SoundCloud page. Apple users can also listen to episodes via the Podcast app, be sure to subscribe to the Step Off! Radio podcast to get episodes directly on your Apple device.