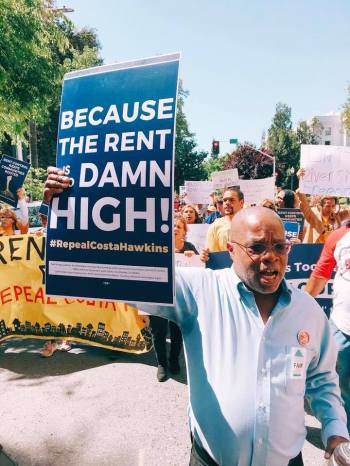 San Diego is one of many cities across the country currently facing a housing crisis, but not from a lack of building materials, labor or even existing livable structures. This housing crisis is being caused by the greed and callousness of corporate landlords, banks, management companies and their proxies in local, county and state government. Corporate landlords, many of whom exploit the most marginalized and vulnerable sectors of our communities, continuously increase rents while posting record-breaking profits from their comfortable offices. Big corporations such as Equity Residential, Essex Property Trust, and The Irvine Company own thousands of units in San Diego, making up nearly a third of total rentals. In fact, the top 20 largest landlords own a staggering 60,000 units in San Diego County, with many smaller landlords owning and managing hundreds of units as slumlords. How did corporate landlords and slumlords gain so much ground in San Diego? San Diego Tenants Union (SDTU) organizer Rafael Bautista at a recent protest gave insight into the history saying:

“The conditions have been there, but what happened after the collapse of the market [2008] a lot of real estate investment trusts, a lot of corporations, took large percentages of ownership in the city, so now you have a majority renter city, which that wasn’t the case before. So essentially what we’re seeing in these different complexes, we’re seeing mass displacement take place. So, we’re seeing either illegal notices to vacate being served to hundreds of tenants, hundreds of units at a time where they’re given these ridiculous rent increases, that ownership knows they can’t afford, so they’re displacing them. That’s the whole issue we have at hand.”

Other corporate landlords such as MC Property Management in Linda Vista and Acropolis Management Services in City Heights have forced tenants to undergo massive rent hikes all while living in subpar and unsanitary units. Why do landlords displace tenants, some of whom have been living in the same complexes for decades? Bautista briefly explained why slumlords displace their long-time tenants:

“We understand this as capitalism, you know a lot of the practices are vulture capitalism. In fact, one of the landlords, which is a huge slumlord in Linda Vista, is a fascist, he’s a Donald Trump supporter, he’s gone to his rallies and we’ve called him out on it. His name is Michael Contreras, google it and you’ll find articles about it. He literally lives in a multimillion-dollar mansion in La Jolla and he’s just sucking up everything from these people”.

“It’s run down, and they neglect it on purpose. It’s intentional neglect, and then it’s the rent hikes. When you combine those on people, of course, they want to leave! And they know that! These are their practices. So, we are going to be protesting the apartment management association, we’re going to hold them accountable. We are gonna go to people’s houses, to really let them know what’s going on”.

Even so-called affordable housing provided by the San Diego Housing Commission is subject to incredibly long waitlists and a shortage of accessible units due in no short part to the artificially supported “housing shortage”. An example of this is the Island View Apartments, so-called “low-income housing” in East Village. As of this writing, there are no available listings at apartments.com or Zillow and the average rent for a studio in the complex is roughly $1100. According to RentJungle, rent for a two-bedroom apartment rose on average 10% throughout San Diego while wages remain stagnant for many sectors of the working class, compounding an already dire situation for many families. With waiting time for Section 8 often extending into years, and waiting lists at many existing low-income complexes, the housing crisis is neither news or unanticipated for local and state politicians.

San Diego City and County government officials have refused to take any kind of action to resolve the housing crisis beyond band-aid solutions. While the city and county promote their plans to support “affordable housing” in the media the sad reality is many of them, including prominent local Democrats, are openly opposed to any solution that targets the exploitative corporate landlords and banks that extract super-profits from their constituents. In fact, the California Apartment Association proudly brags on its website about local politicians it supported in the 2018 local elections and their opposition to rent control. This list includes Democrats Nathan Fletcher and Vivian Moreno, the former the only Democrat on the County Board of Supervisors and the latter the Democrat seat-holder of City Council District 8 that represents Barrio Logan and San Ysidro. As mass displacement and homelessness continue to rise amongst our most vulnerable people relief cannot be expected from the very people profiting off their suffering and displacement. What is needed is a militant tenants movement capable of defending our neighborhoods from intimidation and forced displacement at the hands of greedy landlords and their lackeys in local government.

The SDTU has been organizing in City Heights and Linda Vista against ghastly living conditions and gouging rent hikes. On June 7th residents of a complex off 43rd St in City Heights gathered to announce a rent strike. Pointing to the missing stairs, lack of walls, and perpetual construction clearly on display, tenants proudly declared their solidarity with one another. Residents from Linda Vista came together with tenants in City Heights from Menlo St, 49th St. and 43rd St. complexes to give speeches denouncing the poor living conditions, neglect and exploitative rent increases. The crowd was overwhelmingly working-class women of color, children, and elders; all peacefully asserting their right to organize and refuse to pay rent so long as the conditions are terrible and rent hikes continue. Rent strikes give working-class tenants some level of parity of force with oppressive landlords seeking to exploit them. Appeals from tenants to management to respect their human dignity had long fallen on deaf ears, leaving direct action as the only solution. Even Dr. Martin Luther King Jr. said, “History is the long and tragic story of the fact that privileged groups seldom give up their privileges voluntarily”, a lesson that is just as poignant today as it was in 1963. It will take force to achieve the humble demands made by the tenants of the SDTU, and the peaceful nonviolent force of the march was met by the SDPD acting on behalf of the entire system of capital. These steps taken by the brave tenants of City Heights and Linda Vista reflect the growing tenants’ movement and the need for material support from the organized left.

San Diego needs to continue organizing strong and militant tenants’ unions in its neighborhoods. Cities such as National City are comprised of roughly 70% renters, and the continued movement for rent control needs to continue to extend beyond the boardrooms and offices of large nonprofits and government echo chambers. Organizations such as the San Diego Tenants Union need material support from community organizations committed to helping tenants. Outreach needs to continue extending into every corner of our communities, not just to bring working-class people together to achieve immediate demands but also to set the foundation for future assaults against the system that creates such perpetual exploitation; the economic system of U.S imperialism.  Solidarity for future and ongoing rent control campaigns is fine and good during election seasons but the work must extend year-round in our neighborhoods! We must deconstruct the mythology surrounding organizing and politics in our communities and remember that it is regular, everyday people who create the conditions for change and bring those people into the movement. We have to take the fight to our workplaces, schools, churches, and families to bring as many people into organizing as possible and meet them where they are to win real material improvements for their lives in the here and now. The battle for housing is a definitive struggle for basic human dignity that affects tens of millions of people nationwide. As such, it will take a determined and militant movement of millions to win this long war, but organizations such as the San Diego Tenants Union continue to fight and should be followed and supported closely.

This article was written by José Cortés, an activist, and organizer from San Diego, California.