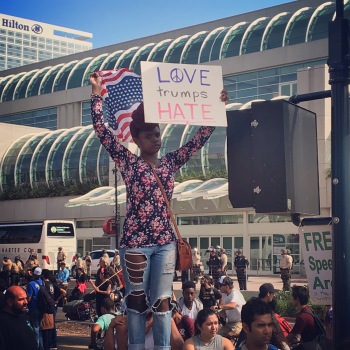 On Tuesday, November 8th, we, as a country, witnessed something that quite frankly many people thought and even more feared would hopefully never happen. Last night, we witnessed Donald Trump elected via the electoral college as the 45th president-elect of the United States. White America overwhelmingly made the unilateral decision to turn the clock back on the entire country and what we saw was a staggering amount of white people collectively mobilize to protect the privilege and power they’ve spent all this time denying they had. For many, this came as a surprise, but for many of us though, we saw it coming from a mile away. For the past 18 months, we’ve seen Trump stoke and encourage the absolute worst, darkest, vile tendencies and sentiments that this nation has to offer. And for the past 18 months, his supporters have gleefully eaten it up with unfettered veracity. Trump ran a platform predicated on hate in its most virulent, unabashed forms and people all across the country not only chose to support him and that platform, they supported it with unprecedented zeal and enthusiasm. This in and of itself speaks volumes. The fact that millions of people voted for a brazenly misogynist, xenophobic, white supremacist is nothing short of a tragedy in the most literal meaning of the word. Trump’s rap sheet of despicable comments and behavior is so long it boggles the mind, including but, by no means, limited to: broadly painting Mexicans as rapist and murderers, calling for the unilateral deportation of 11 million people, demanding a religious test and ban of all Muslim immigrants to the country, suggesting to enact a unconstitutional nationwide stop-and-frisk policy, openly supporting and encouraging violence at his rallies, making disgusting comments towards women, overturn Roe v. Wade, there are so many the list could literally fill a book. After all, this was said and done, we saw white supremacy, xenophobia, bigotry, and sexism take off its white hood right before our very eyes. But the truth is, it never left. White supremacy and patriarchy are far, far stronger than many of us in this country ever wanted to believe. But how could this happen? Not in today’s new “post-racial” America. The big lie is there never was a “new” America, because the original white supremacist model never went out of style.

The fact of the matter is in post-Trump America large swaths of conservatives and others attracted to Trump’s principles and ideologies are realizing they can be outwardly racist once again because a large portion of middle America agrees with their sentiments. Laws hinder most racist-harboring Americans from acting out their ideals, but when around one another, or at the dinner table, or after a couple Coors, their real feelings about African-Americans, Mexicans, Muslims, etc. come out. For the people that harbor these dark sentiments and values, it is very refreshing to them to see a politician once again talk in direct racist terms. This is why Trump has been so popular and galvanizing for a significant portion of white voters, the reason why Trump is so popular is because a large portion of Americans like and agree with what he is saying and the policies he potentially wants to implement. To these people, the election of a Black man like President Barack Obama to the White House, the rise of progressive social movements such as Black Lives Matter and the swiftly changing racial demographics of the country, has been synonymous with a cultural race war in the minds and hearts of many Americans, even if they screened their language and rhetoric through a post-Civil Rights era filter. Perhaps Van Jones of CNN said it best, “This was a whitelash against a changing country, it was whitelash against a black president in part”. In many ways, Jones is not too far off. To his supporters, Trump is the polar opposite anti-thesis to President Obama and the legacy of his presidency. Groups like the Tea Party who masqueraded as liberty-loving Americans were simply code speak for a thinly veneered racist ideology, with Donald Trump as their leader at the forefront of the birther movement. Now, the linguistic gloves have all but completely come off. For the past 18 months, many have thought it was merely Trump’s elite arrogance that allows him to speak in such divisive, racist terms. It is not, nor is Trump an idiot simply bumbling around pandering to the absolute worst that society has to offer. Trump knows that a significant portion of white Americans long for a white hero to arise and say what they are secretly thinking. Of course not all white Americans, but enough to make a difference in the history of this nation, with countless potential consequences that have yet to manifest themselves. Trump does not filter his heartfelt white superiority through a post Civil Rights screen like the Tea Party thinly attempted to do at times. The words of Trump and his followers are the reaction to the election and subsequent re-election of President Obama and the Tea Party phenomenon. What comes next, if history is any indicator, may, in fact, be a very dark episode in American history if left unchecked. The deep insecurity and dangerous fragility of the white American ego have been on full display for the past year and a half. It’s what has fueled the Trump campaign, energized it and gave it its lifeblood. But now the jig is up, the masked has been pulled off, and the curtain has been pulled back to reveal the ugly truth. A victory by a candidate like Trump proves republicans and their constituency don’t want principled conservatism, they want unbridled, resentful nationalism. This is the face of their movement now, holding a banner of authoritarian war-mongers, fake conservative Christians and sexist, racist xenophobic bigots. This is everything the republican party and its constituency has embodied for decades. It’s been their MO since instituting the Southern Strategy in the 1960s and they’ve fed into and encouraged this toxic mentality ever since then. The only difference now is they’re no longer using coded language and dog-whistle politics. With Trump, they have now been validated and emboldened in dangerous ways not seen since the Civil Rights era.

So what do we do now? Where do we go from here? We can no longer afford to underestimate the power of silent racists and remain apathetic to their sway. Trump was able to get as far as he has with his racist rhetoric precisely because this nation has never confronted and dealt with the roots of its racism head-on, and that must change. In the words of rapper Tef Poe, “This ain’t your mama’s civil rights movement”. Armed with the knowledge and wisdom of our predecessors it will be up to us to assume the responsibility of being the next vanguards of our community’s civil rights, which undoubtedly will come under threat under the specter of a Trump administration. We also need to be honest with ourselves, examining the role in which the media has played in enabling Trump, the way that corporate news cycles validated him and his bigotry until it was too late and what repercussions this will surely have in the future as well. And ultimately, after today, after just how far we have allowed our society to stoop, this country is going to have to take a long look at itself and come to terms with the fact that we are not who we have pretended to be. The fact that Donald Trump has gotten this far is a stain on our country that cannot be washed away and one we cannot sit idly back and expect to clean itself up. We will have to actively fight and push back against this foul rhetoric and ideology of mainstreamed hostility and bigotry. For far too many people in this country right now, their checklist for presidential qualities in the president-elect includes a xenophobe that revels in creating a hostile environment for Mexican and Latino communities, who wants to enact a religion-based ban on people, has a long history of discriminating and making disparaging remarks toward African-Americans, women and the LGBT community, who regularly retweets white supremacist and neo-nazis, and is endorsed by the former head of the KKK, along with a rap sheet of other despicable dealings. We cannot afford to sit back and let this mentality and worldview go unchecked. While this unfortunate turn of events is without a doubt an unprecedented step backward, we will persevere through this. We must unite, uplift and protect one another as we navigate this strange new wilderness that our county has become. It will be a challenge, but we cannot afford to be afraid. We will have to fight harder, harder than any of us thought we could push ourselves. But rest assured, we will win.

Photo Courtesy: Roberto Camacho at the San Diego Trump Rally on May, 27 2016