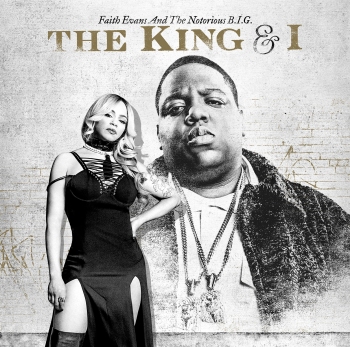 More than twenty years after his untimely and tragically senseless death, Christopher Wallace aka The Notorious B.I.G. and his musical legacy have grown to become the likes of legends, held to the highest of reverence in the Hip-Hop pantheon. Not unlike other artists in the genre tragically taken far before their time, the Brooklyn born artists has not only come to be recognized as arguably one of the greatest emcees and storytellers ever to hold the mic, but a tragic cautionary tale as well. A Hip-Hop martyr whose turbulent and tragically short life and career loom over the genre like a shadow serving as a constant reminder to the dangers of manufactured beef, clashing egos and a toxic media culture that all too often stokes and fans the flames in such ordeals. Also, like many artists taken before their time B.I.G.’s legacy remains eternally encased in amber, who’s flow and unique style transcends time and remains forever fresh to listeners ear’s both young and old alike, still bringing in new fans and listeners with each passing generation.

This being said, with such consistent relevance and popularity it’s hard to believe that after all these years there could possibly still be unused B.I.G. vocals floating around that have yet to be heard. During his short five year long musical career, Wallace wasn’t a studio hound like former friend turned nemesis Tupac Shakur, who meticulously recorded every song he ever wrote or re-used old verses multiple times in various content. Wallace crafted his rhymes internally, with no pen, no pad, straight from the dome in the booth in either one or at the most relatively few takes. Understandably, they’re just simply aren’t that many unused or unheard B.I.G. verses left unreleased, which is also the reason why B.I.G.’s legacy also lays ownership to one of Hip-Hop’s most painfully barren vaults. It’s for this exact reason why the past two posthumous Notorious B.I.G. albums that have come out in the past seventeen years have been either cluttered collections of early demos and outtakes, like on the 1999 release of Born Again. Or cynical and shameless rehashes and recycling of old material like that featured on the 2005 release Duets: The Final Chapter, which oozed with superfluous and now painfully dated guest performers and producer credits.

So after years and years of sub-par releases and underwhelming projects churned out to turn over a quick buck there was excitement when Faith Evans announced back in February that she would be releasing a duet album with her late husband which would feature a “selection of rare and unheard rhymes from the B.I.G. vault”. So how much new material is on The King & I? Simply put, not much. It becomes apparent pretty quickly that the album is comprised of mostly old B.I.G. verses selected from songs either off of Ready to Die and Life After Death with a sparse handful of old freestyles or unused verses here and there throughout the album. While the idea of having Faith Evans do a posthumous duet with her late husband is an interesting concept, which musically could go in a lot of different directions the idea probably would have worked better as a one track novelty on a Faith Evans album or even better as a collection of songs on a short EP. However, on The King & I which stretches this already thin concept out across twenty-five tracks and interludes (twenty-seven if you include ‘Body Language’ and ‘My B’ on the Best Buy special edition) the novelty quickly wears thin and in many cases leaves the listener wishing they were just listening to the original un-altered B.I.G. versions (Ex. ‘Ten Wife Commandments’). Needless to say, the album’s biggest weakness is by far its length. Clocking in at a lengthy hour and nineteen minutes the album is unfortunately cluttered with far too many pointless skits and interludes which seem to only serve as excuses to pad out the album’s already bloated tracklist and runtime. Even though having B.I.G.’s mother Voletta Wallace and Faith Evans detail their experiences with B.I.G. or even featuring Jamal Woolard (who portrayed B.I.G. in the 2009 film Notorious) in a skit recreating a conversation between Evans and B.I.G. are interesting little tidbits, they do little to add anything of much substance or more value to the overall album. This is actually a shame because Evans arguably puts out some of her best work in years here on The King & I. The raw passion and tangible pain that Evans displays on this release strike a chord a particularly sincere and genuine chord as Evans laments decades-old grief on the album. Regrettably, though, The King & I does have the unfortunate luck of being tethered to yet another flimsy posthumous release that painfully relies on recycled B.I.G. content which was already scant to begin with and nowhere else is this fact more obvious than on The King & I.

While The King & I is mostly rehashes of old previously released material, to its credit it is done so tastefully and handled with the utmost care and respect. Unlike other past posthumous B.I.G. albums, Evans limits the guest features and appearances to that of strictly B.I.G.’s friends and cohorts. Featuring the likes of Lil’ Cease, 112, Snoop Dogg, Busta Rhymes, Sheek Louch, Styles P, Lil’ Kim & Jadakiss, there is not a single here today, gone tomorrow, flavor of the month rapper to be seen or heard shoehorned into the album. Likewise, nor are there any quickly dated production credits from contemporary producers enlisted solely to move units either; instead a roster of accomplished, well-respected producers such as Stevie J, Salaam Remi, Just Blaze, Battlecat and DJ Premier are just some of the talent tasked with the responsibility of giving the album a sincere and authentic sound. Sonically, it’s very evident that Evans genuinely took the time and care to ensure that all production used on the album sounded like something that B.I.G. would have actually spit over back when he was alive while also avoiding the trap of sounding dated or over the top in its attempt to re-create a nostalgic 90’s feel and sound. Some highlights from the album include ‘I Don’t Want It’ featuring Junior M.A.F.I.A. member Lil’ Cease, where B.I.G. and Evans flow over a slick Zapp & Roger sample. ‘When We Party’ featuring Snoop Dogg, continues this vibe with a slinky West coast funk infused reworking of B.I.G.’s classic West Coast ode ‘Going Back to Cali’. Producer Just Blazes crafts a certified banger on ‘Take Me There’, enlisting the assistance of The Lox alumni and former Bad Boy labelmates Sheek Louch and Styles P. While longtime collaborator, DJ Premier taps Jadakiss to assist him on ‘NYC’, a slick downtempo ode to B.I.G.’s home city which makes use of excerpts from a freestyle made on the Stretch & Bobbito show. And Busta Rhymes assists Evans on the heartfelt Salaam Remi produced ‘Somebody Knows’, a track detailing B.I.G.’s murder in Los Angles, which still remains unsolved over twenty years later.

At its worst, The King & I is a long winded album which unfortunately over relies on old recycled material and grasps at what little straws of scant new content are still left in in the vaults of B.I.G.’s legacy. However, at its best, the album is a loving and genuinely heartfelt tribute from a person who perhaps knew the man better than almost anyone else which is undeniably heard throughout the album’s entirety. While the album still remains gaunt in regards to new content, more so by circumstance than by choice Faith Evans has managed to arguably craft the most sincere B.I.G. tribute since his passing in 1997. No doubt it’s always great to hear new B.I.G. material, but it’s hopeful that this will mark the final release of strained posthumous B.I.G. albums trying to squeeze out whatever is left from B.I.G.’s catalog. From this point on one would hope that in the future we see fewer projects that rely on old recordings and freestyles and perhaps more original tributes and homages that periodically sample rather than over rely on dusty old material and obscure frestyles.

The King & I is available in stores now to purchase and to stream on Tidal, Spotify, Apple Music and iTunes.