It has been a busy, hectic, productive and above all monumental couple of years for Stephen Bruner aka Thundercat, the virtuosic bass guitarist, keyboardist, vocalist, and producer who has been consistently harnessing critical praise and acclaim with each passing project and collaboration. In just the span of few short years time, the South-Central L.A. based musician has released several critically acclaimed solo projects, collaborated with a plethora of respected artists such as the likes of Erykah Badu, Flying Lotus, Childish Gambino, Bilal, Terrace Martin, and Kamasi Washington just to name a few. And perhaps his most publicized accomplishment yet, being not only heavily featured throughout both Kendrick Lamar’s To Pimp A Butterfly and Untitled Unmastered but singled out as the main driving creative force that “shaped the sound of To Pimp a Butterfly” and being credited as the album’s “creative epicenter”  by Lamar himself. Thundercat’s involvement in what could arguably go down as not only one of the best Hip-Hop records in recent memory but also one of the seminal album of the decade even earned him a Grammy award in 2016 for Best Rap/Sung Collaboration for his work on the track “These Walls” on Lamar’s To Pimp A Butterfly.

Needless to say, Thundercat’s recent mainstream popularity after collaborating with high profile artists has rocketed him into the public sphere after years of quietly working with various groups, artists as well as his own solo material on Brainfeeder. Now, after a nearly four-year wait Thundercat has finally returned to the music scene to bestow upon fans his latest, third feature-length LP, Drunk. Released through Flying Lotus’ Brainfeeder imprint, Drunk serves as the follow-up to Thundercat’s 2015 EP The Beyond/Where the Giants Roam with producer and long-time collaborator Flying Lotus. Drunk serves as Thundercat’s first solo album since 2013’s Apocalypse as well as his first full-length project since working on Kendrick Lamar’s To Pimp A Butterfly. Executed in the same vein as Golden Age of the Apocalypse and Apocalypse, Thundercat’s signature brand of interstellar cosmic-soul and psychedelic, electro jazz-funk fusion along with layered, spacey almost dreamlike vocals, all return along with the use of vintage synths, keyboards, a combination of live and programmed drums and of course, Thundercat’s virtuosic lightening fast skillful playing on the bass. The album is also perhaps Thundercat’s most accessible solo work available to casual fans and listeners as of yet as well. Thundercat takes the noticeable step of including fewer improvisations and solos here on Drunk which gives the album less of an informal jam session type vibe that was present on much of the content featured on Golden Age of the Apocalypse and Apocalypse. While the album is without a doubt Thundercat’s longest album yet, clocking in at just over 50 minutes with a tracklist of 23 songs, most songs are kept relatively brief, giving momentary glimpses of jazzy funkiness that pass by listeners as quickly as they came leaving the listener begging for more. Very few tracks ever cross over the three-minute mark and only one, “Inferno” ever makes it to the length of four minutes long making the album a relatively easy listen with few tracks ever droning on or lingering for too long. 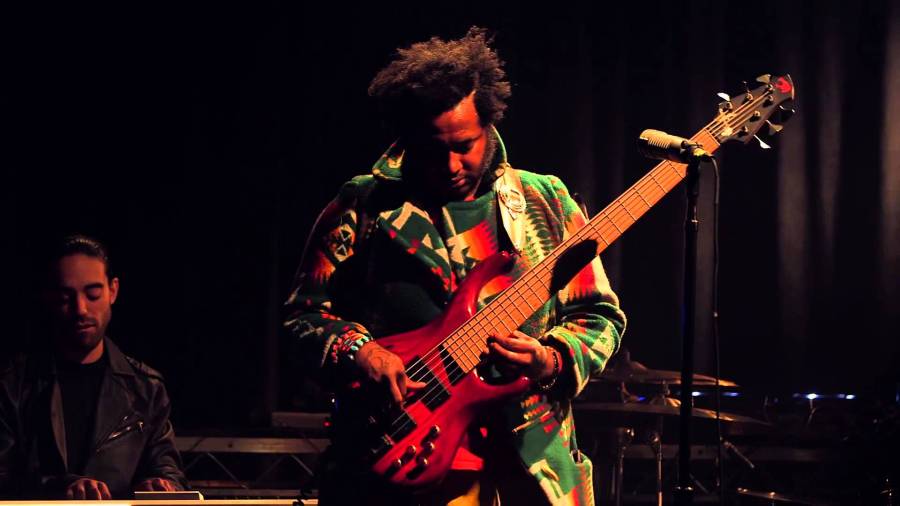 Flying Lotus handles the lion’s share of album’s production, producing 16 out of the album’s 23 songs. Producer Sounwave of Digi+Phonics, the main in-house producers for the Carson-based record label, Top Dawg Entertainment also makes contributions to the album’s production, producing three of the album’s tracks. Past collaborator and fellow label mate Mono/Poly also makes a sole contribution to the album, lending his assistance on the funky “Friendzone” for good measure. The rest of the album’s production is handled by either Thundercat himself or a combination of the aforementioned producers who all lend their talents to deliver a cohesive, unified album that all blends so seamlessly together that unless one were to look up the credits one would be hard-pressed to guess that multiple producers assisted Thundercat’s in his latest endeavor. The album is also most noticeably lighter in overall spirit and tone, with upbeat tracks such as “Captain Stupido”, “Uh Uh”, “Bus In These Streets”, “Tokyo” and “Jameel’s Space Ride”. The album takes on a considerably lighter and more carefree tone not nearly as heavy or dense as its prior counterparts in the past tended to be. “Captain Stupido” featuring Flying Lotus is a testament to this. The song starts the album off on the right foot as it sets the tone for a fun, quirky, oddball adventure with Thundercat’s signature brand of aforementioned interstellar cosmic-soul and psychedelic, electro jazz-funk fusion. This ensemble serves as the album’s musical backdrop which Thundercat intricately decorates with every passing song on the 23 track odyssey of funk meshing together Afro-futurism, video games, politics, and pop culture references.“Uh Uh” is another energetic, high energy track which Thundercat’s bassist skills are placed at center stage amongst a backdrop of pounding drums, jazzy keyboard, and piano arrangements and spacey vocals.

This being said the album also isn’t without its slower, more subdued ambient tracks which shift the album into a lower gear periodically throughout the album’s run time giving the experience a variety of range and emotions during the 51 minute run time. The album mostly manages to strike a balance between its lighter carefree content and slower, introspective tracks that break the monotony and gives variety throughout the album. “Show You The Way” is a fun, carefree track featuring artists Michael McDonald and Kenny Loggins, a jazzy-psychedelic track which also serves as the album’s lead single off the album featuring the three crooners in a moment bridging the gap between the old guard and a newer generation of musicians as the baton is passed from one to the other. Fellow collaborator Kendrick Lamar even drops by to make an appearance on “Walk On By”. Re-united together again once more the duo’s latest collaboration sounds like a yet another long lost gem somehow forgotten as extra left off To Pimp A Butterfly to languish on the cutting room floor only to be rescued and gifted to fans to enjoy and savor. Lamar’s appearance on “Walk On By” is by far the best feature on the entire album and only adds the fuel and desire to see yet another full-fledged musical collaboration between the two in the future. Wiz Khalifa is the only featured artist that remotely sounds out of place on Drunk, being featured on the appropriately titled, yet oddly subdued “Drink Dat”. However, Khalifa’s cameo on the song is so brief and unremarkable it comes and goes with relative swiftness and an even at that the track does not take away nor distract from the album’s overall sound, feel and vibe. Thundercat manages to keep the guest appearances on Drunk down to a minimum, Kendrick Lamar, Kenny Loggins, Michael McDonald, Pharrell, and Wiz Khalifa are the only artist performance-wise to be featured, with Pharrell’s cameo being so brief one could miss it easily if they blink. However, as Thundercat has displayed on his past efforts, he requires very little assistance from guest features and performers and if anything shines brightest when he’s allowed space and autonomy free of superfluous cameos.

Needless to say, Drunk is everything and more one would expect as the next installment in Thundercat’s long line of acclaimed projects and albums. Trimmed down song lengths, welcomed and sensible guest features along with an overall beefed up track list and run time all are a comprehensive testament to Thundercat’s continuing growth as a performer and recording artist. Drunk is also probably Thundercat’s most representative album as an artist. Where his past efforts mostly focused on his musicianship and technical skill (which are in no short supply here) on Drunk we able to see the quirky, weird, introspective and outspoken side which in the past had largely taken a backseat to Thundercat’s immense technical skill and astounding musicality which has earned him the praise and accolades he rightfully deserves. In the end, Drunk is not unlike funk music and Thundercat himself, the album is a little bit of everything. An explosion of different music sounds themes and ideas which all come together in one unified project presented with such soulful gentleness that only Thundercat could deliver. After nearly four years of waiting it is clear that the album was most definitely worth the wait. On top of being yet another beautiful accomplishment of an album, Drunk is not only a testament to Thundercat’s talent as musician and artist but an indicator that the multi-talented virtuoso has no plans of slowing down and that the future is bright with much more to come on the horizon.

Drunk is available in stores now to purchase and to stream on Tidal, Spotify, Apple Music, and iTunes. The album is also available to listen to in its entirety through Brainfeeder’s YouTube channel.

4. Bus In These Streets