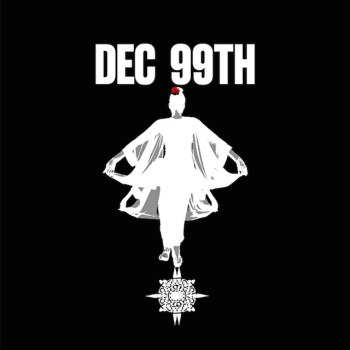 Originally scheduled for a December 9th release and pushed back for unknown reasons, Yasiin Bey (Mos Def) and Chicago-based producer Ferrari Sheppard have finally released their highly anticipated collaborative effort December 99th. Supposedly Bey’s final album, December 99th also serves as the group’s moniker. Debuting as a ‘TIDAL exclusive’ available solely through the streaming service, December 99th is not only Yasiin Bey’s first release since 2009’s Ecstatic but his first full-length collaborative effort with another artist since his debut collaborative Black Star album with Talib Kweli nearly 18 years ago in 1998. December 99th, likewise, also serves as Sheppard’s professional debut as a producer. Bey and Sheppard’s friendship dates back to 2013 when the two artists met in Addis Ababa, Ethiopia and began collaborating on various visual art and web projects. Sheppard, who was working as a photographer and journalist at the time quietly began making music and the two soon began collaborating and recording material in South Africa that would eventually end up on December 99th. The duo has also been making the rounds on media leading up the album’s release, performing select tracks from the album on The Tonight Show starring Jimmy Fallon as well as a highly applauded farewell show at the Apollo Theater.

Initial reactions from fans and listeners, however, have been mixed, to say the least, and have polarized listeners and long-time fans. On December 99th, Yasiin Bey by in large abandons his signature rhyme style in favor of subdued, ambient vocals laced over Ferrari Sheppard’s spacey, minimalist production. This bold artistic position is certainly a far cry from Bey’s past aggressive, intricate lyrical stylings and a departure from the heavy sample-based production the Brooklyn emcee has come to be known for and utilize throughout a majority of his career. December 99th, much like Childish Gambino’s Awaken, My Love! is another highly anticipated project from a critically acclaimed artist that attempts to deliver an intriguing and unique product that most fans and listeners were not expecting, nor exactly asking for; daring to push them into unexpected new directions and territories. Also, not unlike Awaken, My Love!, whether or not fans will embrace or reject the project really depends on one’s musical taste and expectations production-wise from the respective artists. However, novelty aside in regards to December 99th the project simply, unfortunately, lacks the energy and tenacity to match its bold and decidedly alternative sound. While one has to applaud Yasiin Bey and Ferrari Sheppard’s bold artistic approach that dares to push the boundaries of current contemporary music conventions and explore new ideas (especially for a Hip-Hop album), December 99th is without a doubt, a hard-lined acquired taste for many. A taste that unfortunately many casual listeners and even long time fans may find too laborious or simply be unwilling to stomach. The stripped-down, spacey, ambient and minimalist production supplied by Sheppard throughout much of the album along with Bey trading in his intricate, tongue-twisting rhymes and replacing them with sleepy, echoey vocals may simply be too foreign to the ears of casual listeners and deviate too wildly and radically from past expectations to appeal to hardcore fans and followers. Switch ups and risks, if done right, can potentially pay off immensely and reap both praise and accolades especially in an era where few mainstream artists dare to push the envelope and tread outside their own comfort zone. However, likewise, such moves can also backfire just as easily and invoke the frustration and ire of loyal fans who feel unfulfilled by artists they’ve consistently and patiently supported only to be ultimately let down by experimental projects. It is a pretentious and tiring experience that all artists of any artistic merit must almost always tightrope. In a recent Facebook posting Ferrari Sheppard even aired his frustration remarking, “critics & fans are silly for their desire for artists to constantly changing while remaining the same”.

Perhaps to an extent, Sheppard is right. It is a strenuous and trying trapeze act that artists must constantly walk, especially those who consistently put out quality work for as long as Bey has; constantly straddling a tightrope of appeasing fans while still remaining true to one’s self and not limiting their artistic vision for the sake of popularity and commercial appeal. However, it is understandable that after over seven years of patiently waiting and expecting one last, final album from Yasiin Bey, December 99th is viewed with at least some amount of disappointment and dissatisfaction from fans.

By in large December 99th is just simply underwhelming. Not terrible by any stretch of the imagination, it’s not even bad (especially given the low bar set for most contemporary Hip-Hop artists in the game right now) but certainly a disappointment for a long-awaited and supposedly final album that serves as the swan song to a long and illustrious career of a skilled, critically acclaimed emcee such as Yasiin Bey. At its best, December 99th is a welcomed final return for Yasiin Bey after a seven-year-long absence. At its worst, it’s an underwhelming, groggy ten track endeavor, that over the course of twenty-nine minutes displays a few fleeting glimpses of promise but never truly delivers. December 99th may have served as a daring and amusing experimental throwaway project that explored new avenues had it been released mid-way through Yasiin Bey’s career. But as a final album to close out one’s career, it simply comes off as a half-hearted, and underdeveloped passion project that was passed off as a studio album and forced upon its listeners as Yasiin Bey’s final curtain call. While nobody can condemn Yasiin Bey for creating what rings true in his heart, nobody in their right mind could condemn any fan that was expecting one final true Mos Def album.

“Tall Sleeves” is undoubtedly the highlight of the album, since it is perhaps not only tonally the most energetic track but also the closets that resembles and showcases brief glimpses of emceeing that Yasiin is best known for. However, even then, the rhymes feel below an emcee of Yasiin’s caliber, who has proven himself to undoubtedly rank among one of the best emcees of all time to grace the mic and still somehow manage to still fall flat. One positive attribute that does stand out is the album’s simple, but beautifully elegant artwork, which was also designed by Sheppard showing off his skills as a visual artist. The album artwork features the silhouette of a woman with a rose in her hair gracefully balanced on a compass, supposedly inspired by a dream of Sheppard’s. It’s hopeful that Ferrari Sheppard continues his work not only as a producer but as an emcee and visual designer as well. Sheppard’s production, while a departure sonically from past Yasiin Bey regards is still done very well and would suit quite a variety of different artists whose styles lend themselves more easily to his progressive production. It’s unfortunate that Yasiin Bey opted to sing throughout a majority of the album in preference of emceeing because the up-tempo production supplied by Sheppard does beg to be touched by an unbridled emcee. Not a bad offering, especially from an artist who’s never helmed an entire project as the sole producer and hopefully the first of many more projects from Ferrari Sheppard.

It is hopeful that December 99th is only Yasiin Bey’s first pre-retirement album, supposedly another collaborative effort with New Orleans producer Mannie Fresh (another producer with a very different musical nature) titled OMFGODBKNOLA is rumored to be in the works. However, fans and listeners will have to wait and see when and if the project ever actually materializes. In the meantime, it appears that for the time being December 99th will for now be Yasiin Bey’s final project. While December 99th may not be the album fans were expecting nor asking for, it is nonetheless a testament to Yasiin Bey’s growth as an artist and his willingness to experiment and push the envelope even in the shadow of looming retirement. It is likely that Bey will continue to make music even after retirement, whether anybody else will hear any of it is another question altogether. For now, fans and listeners alike will have to remain content with December 99th, which like all good art will continue to polarize and facilitate discussion amongst fans and the greater Hip-Hop community.