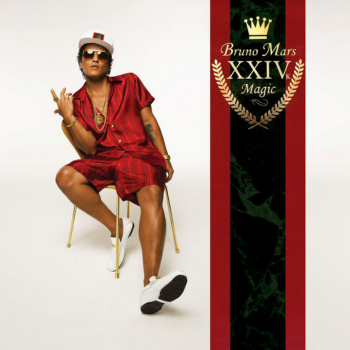 Four years after the release of his sophomore album Unorthodox Jukebox, Bruno Mars has returned with his third studio album, the vintage funk-infused follow up, 24K Magic. Continuing in the same vein as 2014’s ‘Uptown Funk’ with Mark Ronson, also being Mars’ biggest hit of his career thus far 24K Magic continues the same trend of re-creating vintage funk and R&B soul which is sorely lacking in today’s homogenized and uninspired pop scene. At a length of just 9 tracks, 24K Magic is a throwback album in every sense of the word, seeped from head-to-toe in 33 minutes of retro, old school 80’s funk and 90’s New Jack Swing production. Even the physical album itself looks like a product of the early ’90s, all the way down to the track titles printed in a basic font, to the clear shiny cover of the CD. Needless to say from the album’s design, production and overall sound it’s clear to see the album’s heavy influence from the late ’80s and early ’90s and its adherence to replicating the era’s distinctive musical hallmarks.

With the help of producers Shampoo Press & Curl and long-time collaborators The Stereotypes, Mars works to emulate the sound and energy of legendary artist of the era such as Babyface, Bobby Brown, Boyz II Men, Jodeci, Jimmy Jame & Terry Lewis, New Edition and New Jack Swing architect Teddy Riley. Working tirelessly to authentically replicate the blueprint laid down by these artists, 24K Magic isn’t just an homage from Bruno Mars, its a genuine heartfelt love note to the era and childhood heroes that inspired him.

The album’s title track, ‘24K Magic’ making heavy use of the talkbox pays homage to pioneers Zapp & Roger, crafting a bouncy, funk-infused party anthem which could have easily been a summertime hit had it been released just a few months prior. The album also takes a few welcomed twists and turns, allowing Mars to flex and showcase his versatility for the audience. Tracks such as ‘Perm’ switch up the energy to a vibrant, up-tempo dance track, invoking all the spirit and vibrancy that one would expect from a lost James Brown record. ‘Chunky’, reminiscent of Michael Jackson’s ‘Baby Be Mine’ also brings a fun and playful quality as Mars’ croons over vintage synths and keyboards. While slower, down-tempo tracks such as ‘Versace on the Floor’ and ’Straight Up & Down’ are clear nods to the R&B ballads and slow jams of the late 80’s early 90’s which clearly are the blueprint for a majority of the album’s musical and spiritual inspiration.

The album’s production also graciously lends itself to Mars’ infectious swagger and authentic energy which is placed on full display throughout 24K Magic. Even though some fans and listeners have been critical of the albums brief 9 track playlist, and 33 minute run time, Mars himself has stated in an interview with NME.com in regards to the album’s length “If I can’t pull you in with nine songs, I’m not gonna pull you in with 19!”. Nowhere is this more evident than on 24K Magic, the album is brief but not too short, it’s a fun, amusing throwback album that doesn’t overstay its welcome nor beat the listener overhead with forced nostalgia that other similar albums in the past sometimes tend to do.

Bruno Mars seems to have found a particularly profitable formula here with 24K Magic, crafting a throwback project resurrecting the funk and new jack swing sounds of yesteryear that appeals to the incessant nostalgia of ’80s and 90’s babies, while still attracting and appealing to the ears of new, younger listeners as well. While this trend has gained more and more popularity and momentum over the years as millennials continue to progress into adulthood, few if any pop singers in the scene today seem to have taken advantage of it with as much grace or swagger as Bruno Mars has for the past several years. Overall 24K Magic simply put is a short, simple, and fun little album that’s easy to listen to. It appeals to our own inner nostalgia while also embracing a new, younger generation and introducing them to a forgotten sound. In a year full of numerous projects taking musical risks it is hopeful this is just the beginning a brand trend of musical innovation for contemporary pop music.

24K Magic is available now to purchase in stores everywhere and available to stream on Tidal, Spotify, Apple Music & iTunes.